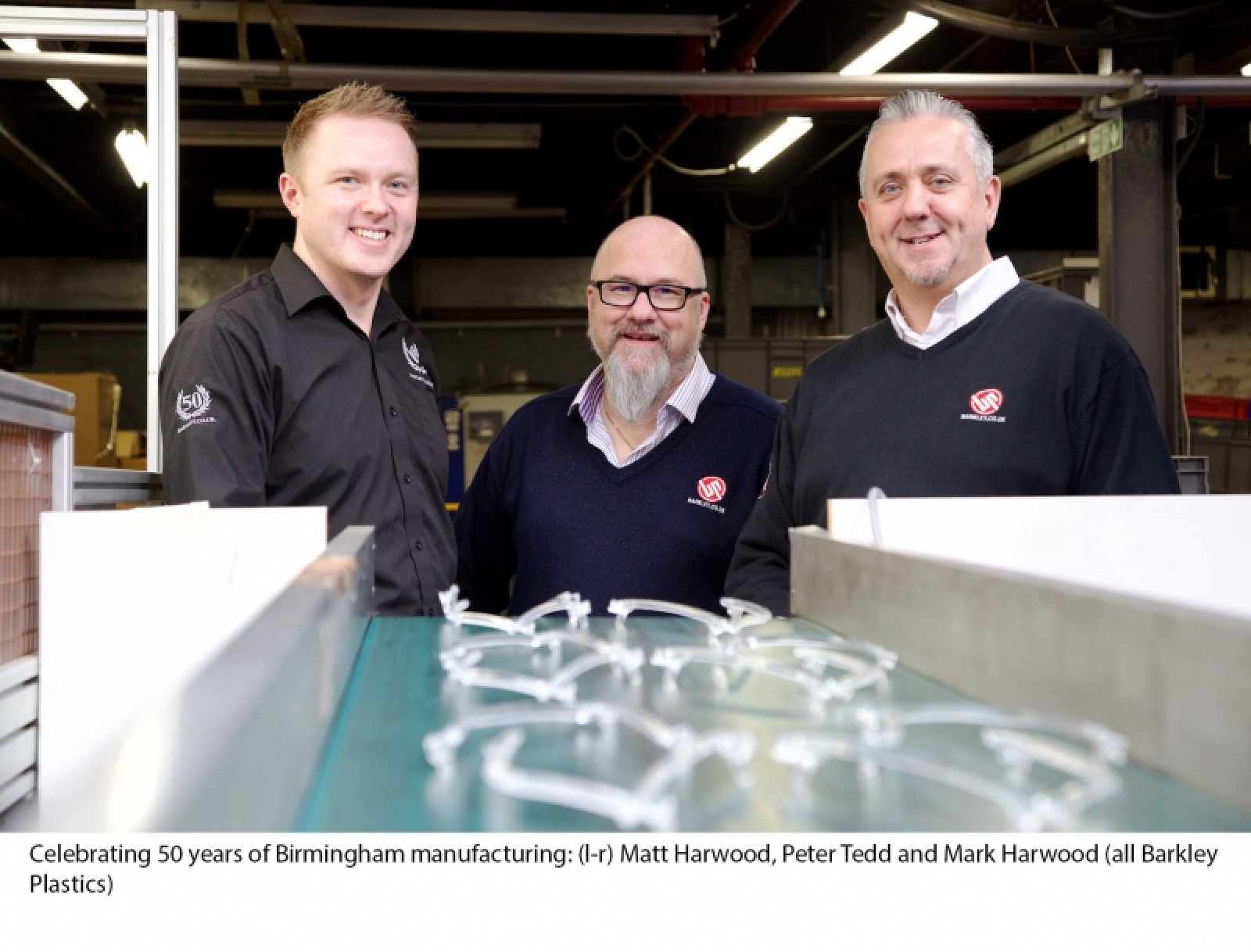 One of Birminghams best-known manufacturers is on course to smash the £7m barrier for the first time in its 50-year historyand all because of an advert in the local newspaper.

Barkley Plastics, a plastic injection and toolmaking specialist, is celebrating the landmark anniversary in style after bringing a number of new automotive contracts home and launching its own line of PVC floor tiles called Plasfloor.

More than £600,000 has been added to turnover in the last twelve months, with 8 new jobs created taking the total workforce to 112, three of whom are currently completing their apprenticeships.

That is a far cry from when John Barkley used the local newspaper to attract four toolmakers  Bob Chittleborough, Bob Fisher, Maurice Harwood and Tony Challinor - to start his own plastics firm supplying into nearby automotive suppliers.

The quartet initially kept their day jobs at Lucas, choosing to work the evening at John Barkley Plastics, before a surge in demand from Mini, Rolls-Royce and Lucas themselves made them all take the plunge and go full-time.

Weve certainly come a long way since we first started in Balsall Heath in 1965, explained Mark Harwood, the current Managing Director and son of one of the original four.

The name Barkley Plastics is now recognised throughout industry for its world class quality in injection moulding and toolmaking and we currently supply components that are used in domestic goods, innovative locking devices and for car makers including BMW, McLaren and Jaguar Land Rover.

Just last year, we hit the headlines for supplying 20,000 plastic baubles to the worlds largest chandelier used at the Winter Olympics in Sochi.

He continued: Its fantastic that we are on course to hit a record £7m turnover in 2015, a great way to mark the efforts of every member of staff that has contributed to 50 years of manufacturing.

Barkley Plastics five decades in business have certainly been eventful, covering the automotive boom of the 70s and MG Rover going under to the global recession of 2009 and the new reshoring phenomenon that is currently taking place.

During that time, the company moved to its current Highgate premises in 1968 and, many incarnations and investment decisions later, now boasts an 85,000 sq ft facility full of plastic injection moulding machinery and a dedicated toolroom that is working 24-hours to keep up with demand.

The factory has seen some famous products go through its shopfloor, including the iconic 70s Homepride Flour Men, the Big Yellow Teapot for bluebird toys, paintball products, skateboard wheels and parts for the Raleigh bike.

Automotive continues to play a major part in turnover, with flashing beacons and interior components still made for many car makers, not to mention door handles for JLR and rear lamp components for Nissan. A current speciality is light guides, which are now being introduced in many new cars to create ambient lighting.

Our people have been vital to our success, with many being with us for long periods of time. In fact, the longest serving member of staff is David Challinor, who is also one of the sons of the original four and spent 43 years working on our tools. Only this year, we also saw one of our directors  Maurice Cassidy  retire after 35 years of hard work and fantastic service, continued Mark.

Theres a lot of special events planned for the course of the year, including a party for current and former employees and installation of our largest ever plastic injection moulding machine. The 650 tonne Negri Bossi gives us the opportunity to produce larger components and go after contracts in markets weve never looked at before.

Another milestone in Barkleys history has been its involvement in the Midlands Assembly Network (MAN), a group of nine sub-contract manufacturers that work together to win work at home and abroad.

The company was a founder member of the unique collective and has benefitted hugely from sharing best practice, learning about new processes and collaborating on apprentice training programmes.

It is currently working with other MAN companies to bring two innovative locking devices to market in Loqski and Guardfreight. The latter has just had its global launch and is promising to help reduce the $80bn lost cargo issue.

Mark concluded: Who would have thought that a little job advert in the local paper would have turned into a successful 21st century manufacturing operation. The key now is to plan ahead and how we are going to make the most of the next 50 years.