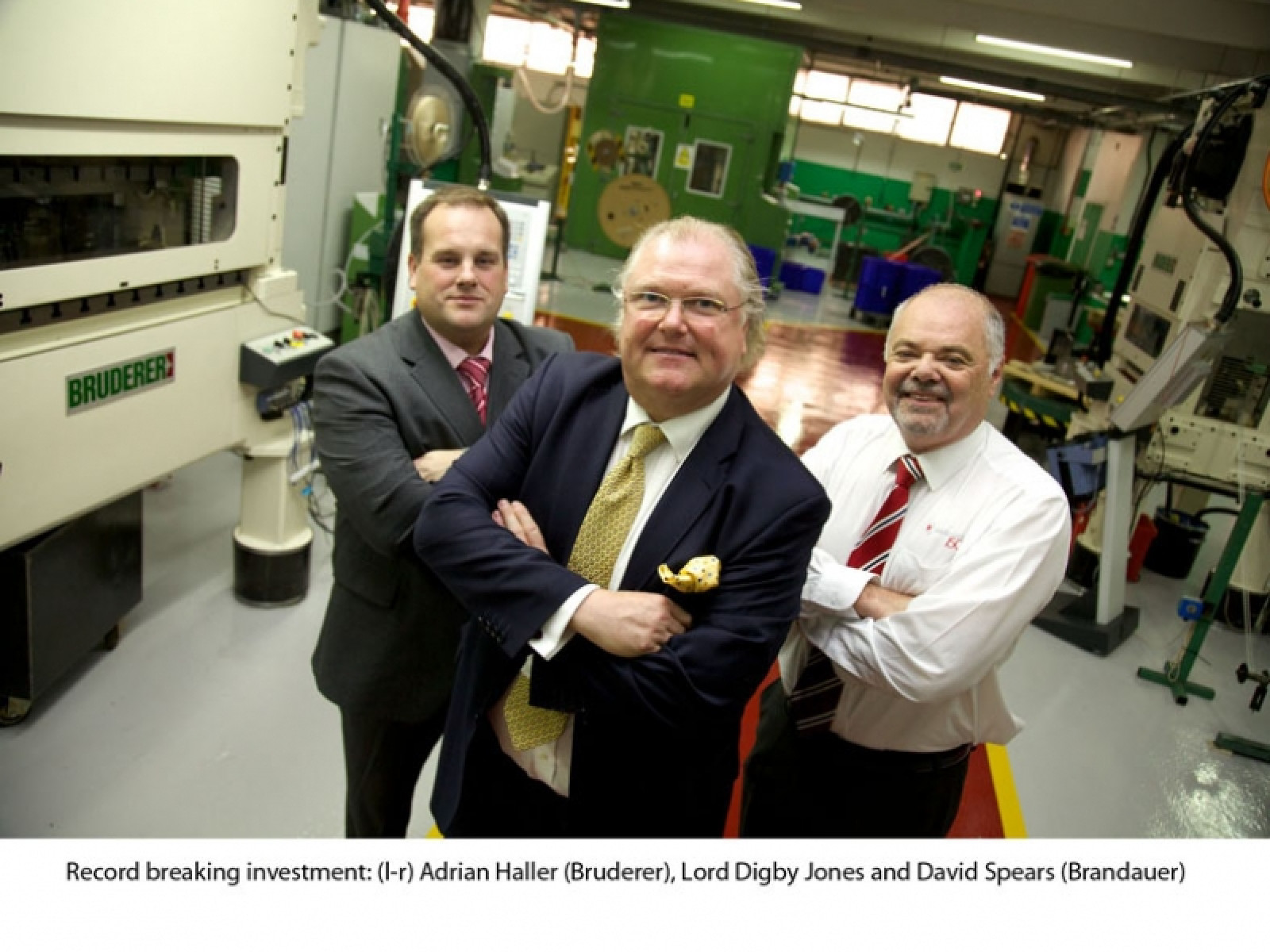 One of the UK’s leading industrialists helped a Birmingham precision component manufacturer mark its largest ever investment yesterday.

The £750,000 investment has the potential to add £2m of new sales to the firm’s £9m turnover and increases its ability to offer tool transfer services to clients in the aerospace, automotive, electronics and renewables sectors.

In addition to starting the new machines, Lord Jones also met a number of staff members, including Stuart Berry who has progressed from his Apprenticeship to completing a degree in Management of Manufacturing Systems at Birmingham University.

“I was very impressed with what I saw at Brandauer. This is a company that recognises the need to continually improve the way it does business if it is to compete with international rivals,” commented Lord Jones.

“This latest investment in the new presses is a clear indication of its desire to be the best in the world and I’m delighted to see the same commitment is in place to developing its workforce.”

He added: “With nearly 80% of its turnover going overseas, it’s a great example of how the West Midlands can still be a global manufacturing force.”

The installation of the Bruderer BSTA 510-125B2 and BSTA 280-75B2 is a world first and provides the company with the latest B2 control technology and high-speed precision servo feeds.

Capable of 2000 strokes per minute, it is 100% faster than any machine the company previously possessed and a significantly upgraded tool loading area of up to 1250mm allows the firm to accommodate larger modular tools with more complex, additional operations.

David Spears, Managing Director at Brandauer, picked up the story: “At £750,000, this is the largest single investment we have ever made and gives us greater speed, greater quality and greater efficiency to target new sectors.

“We’ve already won new work that will go straight on the presses, including complex parts for automotive electronics and an alternative fuel cell.”

He continued: “It was great to have Lord Jones here to officially commission the line, as he’s one of manufacturing’s most passionate supporters.”

Brandauer – one part of the Midlands Assembly Network - is hoping to push its tool transfer service for customers wishing to move production of existing component lines.

This provides clients with a risk-free opportunity to free up capacity or remove potential production bottlenecks.

David, who oversaw the visit with fellow Directors Rowan Crozier and Theresa Williams, concluded: “The 150th anniversary is a major milestone for the business and we’ve already marked it with a Royal visit, the launch of a new book and successful appearances at MACH, IFSEC and Subcon.

“Having Lord Digby Jones start production on our new presses is a great way of marking the investment, an investment that will undoubtedly help us move towards £10m turnover by the end of this year.”